Actually, Chinese medicine is an interconnected and independent system of thought and practice that has been developed over three thousand years. Based on ancient texts, it is result of a continuous process of critical thinking, as well as extensive clinical observation and body testing. It represents a complete formulation and reformulation of material by respected clinicians and thinkers. It is also, however, rooted in the philosophy, logic, sensibility, and habits of a civilization entirely different from Western medical system. It has therefore developed its own perception of health and illness.

Traditional Chinese medicine (TCM) is based on fanciful notions that ill health is caused by "imbalances" of the flow of "vital energy" (Chi or qi) through alleged pathways called "meridians." The diagnoses made by its practitioners have very little to do with people's actual health problems. One study has found that acupuncture literature does not provide a consistent framework for evaluating patients, and at least seven studies have found that when multiple practitioners see the same patient, their TCM diagnoses vary considerably. This is not surprising because TCM concepts have little relationship to anatomy and physiology and the body processes that TCM postulates cannot be measured by scientific instruments.

The practitioner describes the disharmonies in terms of the patterns they manifest. These are known as the Eight Fundamental Patterns: Interior, Exterior; Heat, Cold; Excess, Deficiency; Yin, Yang. These terms are used to describe the way that disharmony is created in the mind/body/spirit.

Interior and Exterior patterns tell the practitioner where in the body the disease resides.

The Theory of Yin-Yang
The philosophical origins of Chinese medicine have grown out of the tenets of Daoism (also known as Taoism). Daoism bases much of its thinking on observing the natural world and manner in which it operates, so it is no surprise to find that the Chinese medical system draws extensively on natural metaphors. In Chinese medicine, the metaphoric views of the human body based on observations of nature are fully articulated in the theory of "Yin-Yang" and the system of "Five" Elements?

The direct meanings of yin and yang in Chinese are bright and dark sides of an object. Chinese philosophy uses yin and yang to represent a wider range of opposite properties in the universe: cold and hot, slow and fast, still and moving, masculine and feminine, lower and upper, etc. In general, anything that is moving, ascending, bright, progressing, hyperactive, including functional disease of the body, pertains to yang. The characteristics of stillness, descending, darkness, degeneration, hypo-activity, including organic disease, pertain to yin. The function of yin and yang is guided by the law of unity of the opposites. In other words, yin and yang are in conflict but at the same time mutually dependent. The nature of yin and yang is relative, with neither being able to exist in isolation. Without "cold" there would be no "hot"; without "moving" there would be no "still"; without "dark", there would be no "light". The most illustrative example of yin-yang interdependence is the interrelationship between substance and function. Only with ample substance can the human body function in a healthy way; and only when the functional processes are in good condition, can the essential substances be appropriately refreshed.

The opposites in all objects and phenomena are in constant motion and change: The gain, growth and advance of the one mean the loss, decline and retreat of the other. For example, day is yang and night is yin, but morning is understood as being yang within yang, afternoon is yin within yang, evening before midnight is yin within yin and the time after midnight is yang within yin. The seed (Yin) grows into the plan (Yang), which itself dies back to the earth (Yin). This takes place within the changes of the seasons. Winter (Yin) transforms through the Spring into Summer (Yang), which in turn transforms through Autumn into Winter again. Because natural phenomena are balanced in the constant flux of alternating yin and yang, the change and transformation of yin-yang has been taken as a universal law. Traditional Chinese medicine holds that human life is a physiological process in constant motion and change. Under normal conditions, the waxing and waning of yin and yang are kept within certain bounds, reflecting a dynamic equilibrium of the physiological processes. When the balance is broken, disease occurs. Typical cases of disease-related imbalance include excess of yin, excess of yang, deficiency of yin, and deficiency of yang.

The Theory of Five Elements
Similar to the theory of yin-yang, the theory of five elements: wood, fire, earth, metal & water were an ancient philosophical concept used to explain the composition and phenomena of the physical universe. In traditional Chinese medicine the theory of five elements is used to interpret the relationship between the physiology and pathology of the organs in human body and their relationship to the natural environment. According to the theory, the five elements are in constant move and change, and the interdependence and mutual restraint of the five elements explain the complex connection between material objects as well as the unity between the organs in the human body and the natural world. 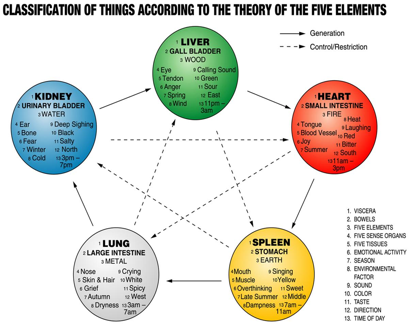 In traditional Chinese medicine, the visceral organs, as well as other organs and tissues, have similar properties to the five elements; they interact physiologically and pathologically as the five elements do. Through similarity comparison, different phenomena are attributed to the categories of the five elements. Based on the characteristics, forms, and functions of different phenomena, the complex links between physiology and pathology as well as the interconnection between the human body and the natural world are explained.

The five elements emerged from an observation of the various groups of dynamic processes, functions and characteristics observed in the natural world. The aspects involved in each of the five elements are follows:

Between the five elements there exists close relationships that can be classified as mutual promoting and mutual restraining under physiological conditions, and mutual encroaching and mutual violating under pathological conditions. By mutually promoting and restraining, functions of the various systems are coordinated and homeostasis maintained. By encroaching and violating, pathological changes can be explained and complications predicted.